No I haven't been spending all day in bed but judging at the Tatton Park Flower Show - in particular the Flower Bed Competition. This was the last of my judging engagements for this year and I have to admit to a little relief. Trekking around the country and living from a suitcase is not exactly relaxing. At the same time, judging flower shows is a privilege and I do enjoy seeing all the exhibits in their pristine state. Just loved this garden by Tony Woods - lovely detail and exquisite planting. 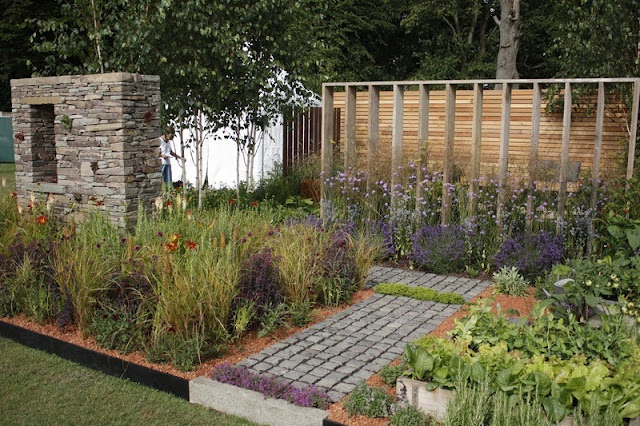 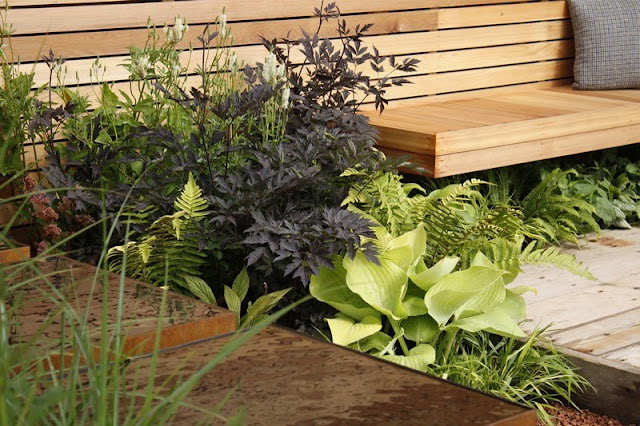 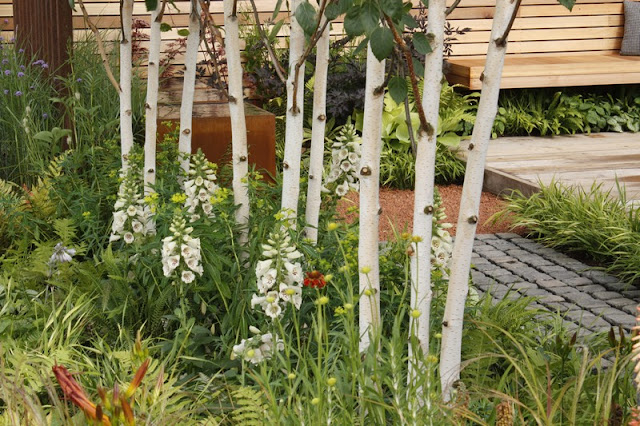 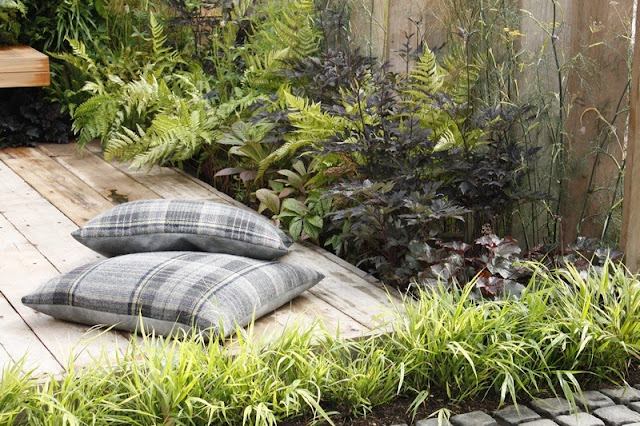 One of my duties at Tatton, which I have done for several years, was to judge the Flower Bed Competition. Sadly this year there were only seven beds, a huge decrease from the 20+ we had when I started doing it five years ago. No doubt a response to local authority cuts, as most of these entries are from parks departments. Despite this the remaining beds were a fabulous standard. The beds are a standard size and planting must include at least 30% bedding plants. Each bed has a theme and marks are allocated for interpretation of this as well as plants, props, design and detail. The bed should be capable of growing on throughout the summer season. We awarded two Golds, three Silver Gilts and a Silver and for those of you that are concentrating, the seventh bed was not competitive. One exhibitor had withdrawn and so this was a last minute filler.

The Best Flowerbed Award and a well deserved Gold Medal went to Manchester City Council for the Ripple Effect, a beautifully co-ordinated bed in shades of blue, white and silver. This display had been designed by members of the Mary & Joseph House, a centre for mental health recovery. As well as beautifully grown plants, the exhibit included a lovely piece of timber sculpture ending in a 'nest' displaying five colourful ceramic decorated eggs made by the residents. 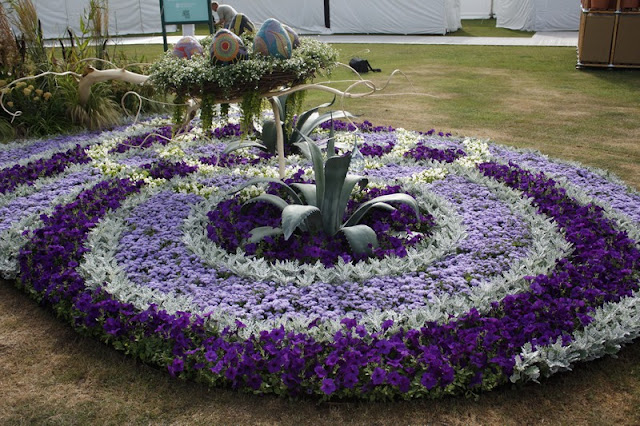 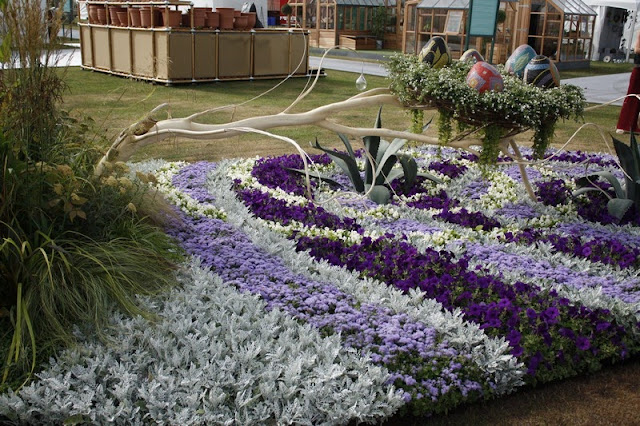 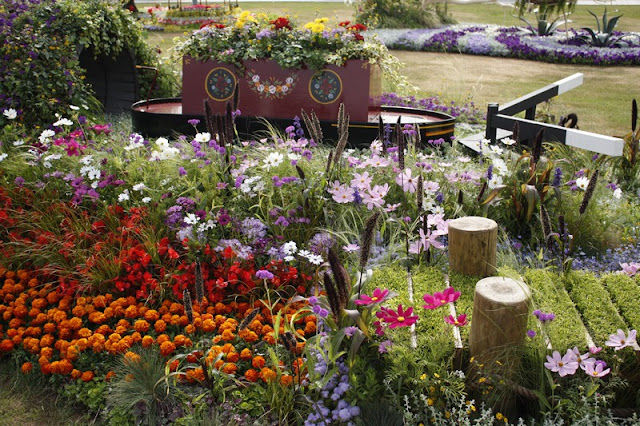 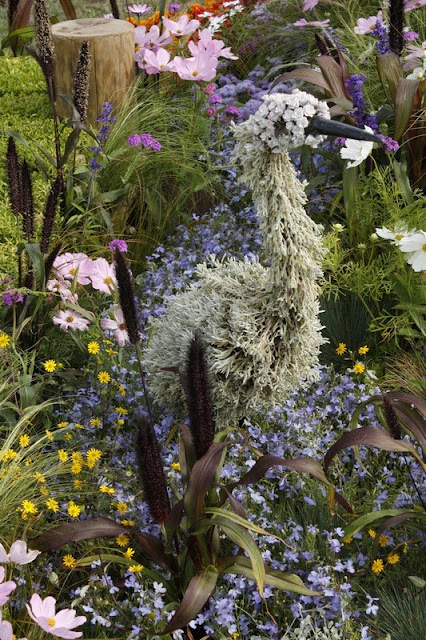 Amongst the other beds there will be much to catch the interest of the visitor. The flowerbeds have been a feature of the Tatton Show since its inception and I do hope that something can be done to maintain this tradition and encourage future participation.

Posted by Pampas2Palms at 3:27 AM No comments:

New and novel or tried and tested.

Each year I struggle with knowing whether to fill my tiny garden with old favourites that I know will perform or whether to try something new. There is of course no easy answer and I inevitably find myself not being able to resist some new plants whilst still trying to cram in just a few much loved favourites that I've grown maybe many times. This particularly applies to annuals and exotics that need replanting each year. Anyway - with a mixture of successes and failures, new and old,  it still doesn't look bad, considering what it looked like when I returned home in February.  And the new greenhouse has slotted in well - you can hardly see it.


There's a few favourites I just must have! Firstly,  castor oil plants, the various different types of Ricinus that are so easily grown from seed. I particularly like New Zealand Purple which has wonderfully rich ruby leaves overlaid with a steely metallic sheen. In a good season, they will sometimes make 6ft. Then there's the purple banana Ensete ventricosa 'Maurellii', which I also love for its lush ruby red foliage. I just wish I was able to overwinter and get a giant specimen! Canna musifolia 'Grande' is one of the fastest growing cannas and may well make a huge 3m plant by the end of the summer. I just love its lush exuberance but don't expect it to flower - in the UK its usually just a foliage plant. I also love white flowers and so grew some white cosmos again this year, the cultivar 'Purity'. I wanted them last year but couldn't bring myself to spend £3 per plant! Seed was cheaper - much! I also have a big pot of pansies bought as three small plants from the local greengrocers, on a very bleak day in February. Since then they have flowered tirelessly and are still full of bloom, although I admit I have dead-headed them. (Now that a sign of a man with too little to do - dead-heading pansies!) I was also given a seedling of Cyperus papyrus which I have grown before but I love its delicate green umbrella fronds.


Amongst all this are the newcomers. I have been very pleased with my Fatsia 'Spiders Web' which has nicely filled a hole in my white, black and red border. Acanthus 'Hollard's Gold has done well but is far too close to my Fatsia 'Annelise'. Less effective is Acanthus 'Tasmanian Angel' which seem to be struggling but poor thing has virtually no chlorophyll. I do hope it survives long enough to produce it's pretty pink flower spikes. A couple of years back I was attracted to some simple tall French marigolds called 'Striped Marvel' which produced a tight pot of growth smothered in small bi-colour flowers. Sadly mine are straggly and flowers are at the moment sparse. My Digitalis 'Illumination' (or is it an Isoplexis?) has made a strong green plant but as yet no sign of flowering. Impatiens omeiana overwintered well and grew vigorously in the spring but is now struggling in the heat. Shoots are also wilting and I do wonder if its susceptible to downy mildew which has been in other gardens along the street in the past.


One very common but welcome addition this year has been some Calendulas that have flowered heroically, again with dead-heading. I don't think I have grown these since my childhood but I wanted to try some of the newer strains. Finally on my patio table I have a single red begonia. I think its the cultivar 'Flambouyant' which  has been in bloom since mid May and is still full of flowers.  And in case you hadn't noticed I just love bright colours!

A showy garden but not a show garden in sight

My day at the Hampton Court flower show on Monday was hot, sticky and tiring! The journey from Nottingham via the wilds of Clapham junction to the far reaches of Hampton Court took a tedious five hours, meaning that I almost missed lunch (vital) and arrived just in time for judging (fairly important).

After judging in the floral marquee and a long moderation meeting, my mind was on food and a drink - yes - I NEEDED a glass of wine! After an abortive wait at a gourmet burger stand, where a hiccup with the credit card machine was taking the full attention of the only three staff, I settled for fish and chips which was actually very good if not quite in the style for the gala evening! My only disappointment was spilling half my wine - maybe I didn't NEED it! Anyway the upshot was that I didn't get to look around until probably 7.30pm by which time, I admit I just wasn't in the mood, so I saw very little of the show.  If you want to see a great account of all the show gardens go to Gaz and Mark's superb blog, Alternative Eden where you'll find some lovely pics and a great account. I did however take a quick look round the floral marquee and took some pictures of Fir Tree Pelargoniums who quite justifiably won the best in the floral marquee award. These are no small plant fillers but wonderful show specimens, some many years old that are carefully nurtured, returned to the nursery, pruned and brought back to shows each year. Well done Helen!


After a very hot night in a noisy Holiday Inn next door to Teddington Station, I made my way back to central London for breakfast in my favourite bistro, Balans in Old Compton Street. I had decided to spend the day in Regent's Park which I have never really explored. This 410 acre (166hectare) park was originally laid out in the 19C to designs by the architect John Nash who designed the many beautiful terraced houses that surround the park. The work was commissioned by the Prince Regent (later King George IV) hence the name Regent's Park. A new royal residence should have been the centerpiece of the park but was never built.  It was opened to the public in 1835, originally for just two days a week. London Zoo still occupies land to the north of the park. Queen Mary's Gardens in the Inner Circle were opened in the 1930's on an area previously leased to the Royal Botanical Society. This was named after the wife of King George V and features 12,000 rose in 85 varieties. Sadly some of the beds were showing badly disfigured plants with mildew and blackspot but with European restrictions, there are so few chemicals available to control these diseases. 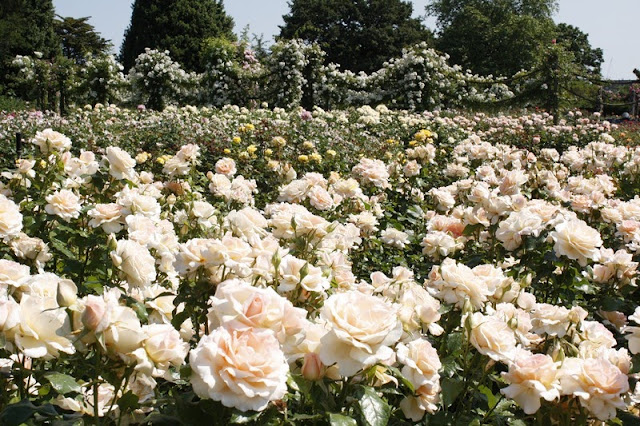 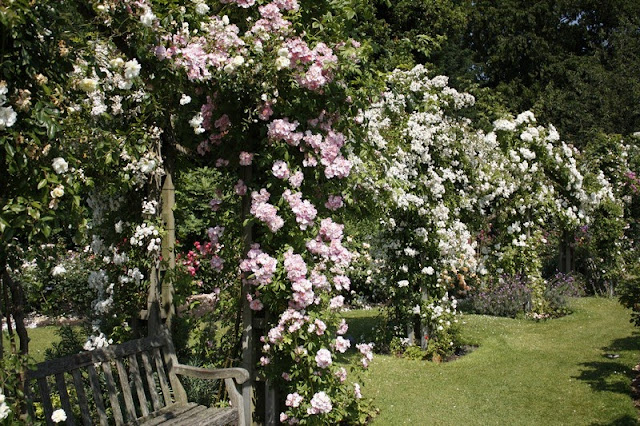 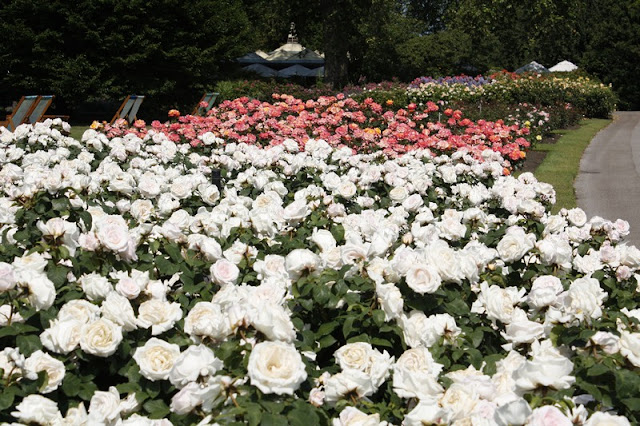 By modern standards, these gardens are very formal and dated but are in general maintained superbly, so excellent examples of traditional parks horticulture of that era. As well as the rose garden, there is formal bedding, herbaceous borders, pools, fountains, sub-tropical bedding, a rock garden, a lake, wildlife garden, allotment and many trees and shrubs. 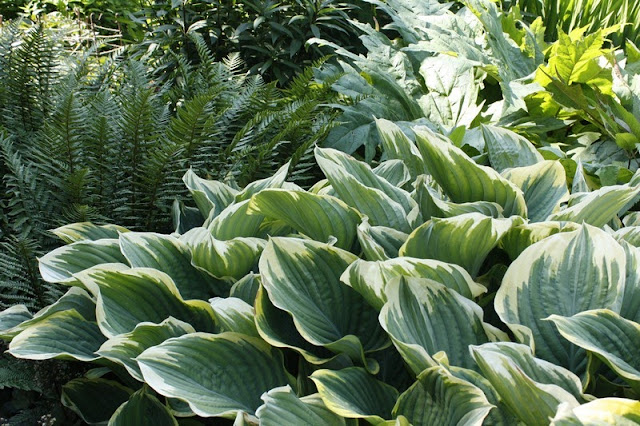 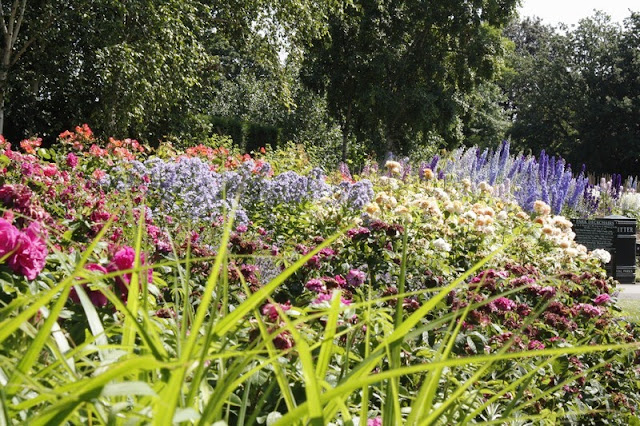 As well as Queen Mary's Gardens, there are some very formal borders called the Avenue Gardens with superb examples of mixed borders and formal Victorian bedding - love it or hate it, this is well done and entirely appropriate in a heritage park. Some striking colour schemes and good plant associations 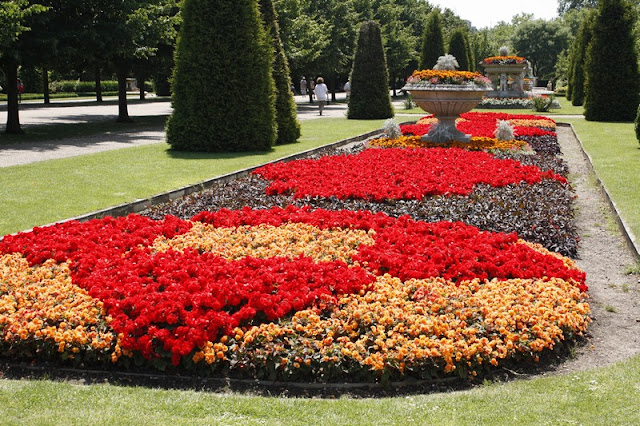 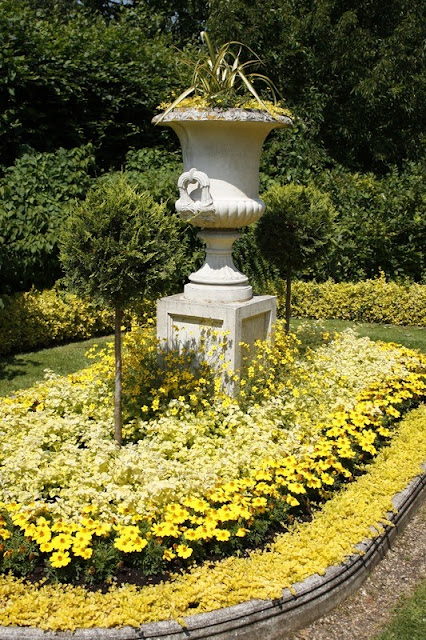 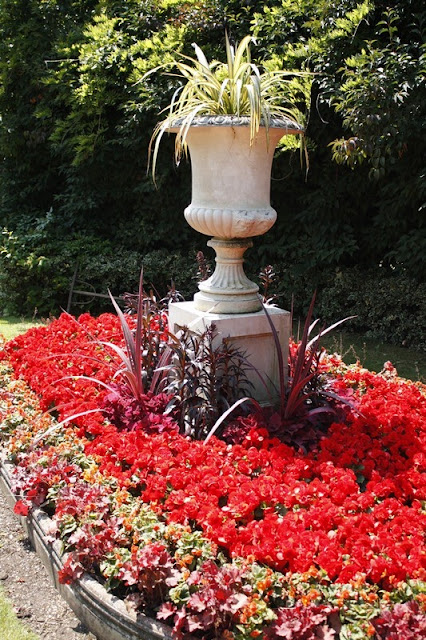 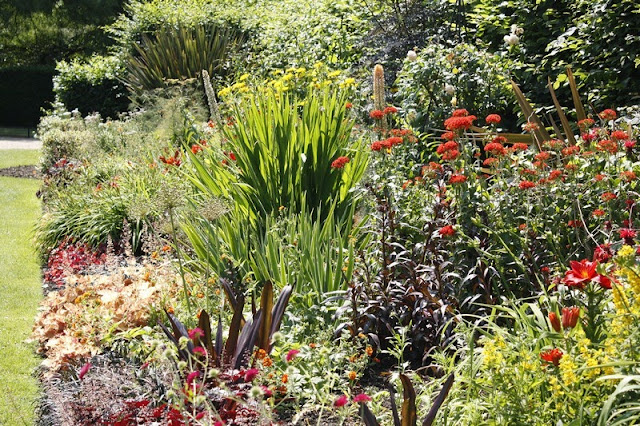 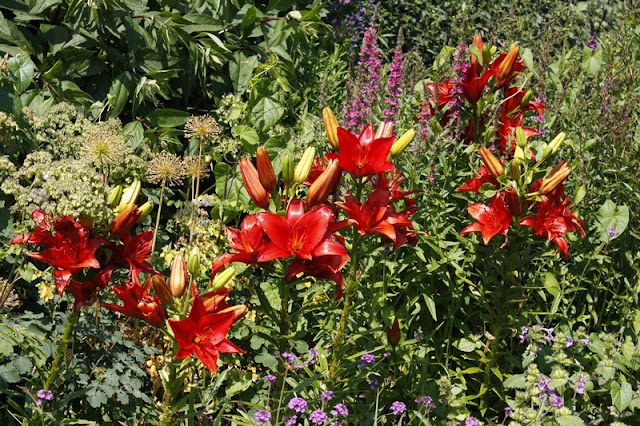 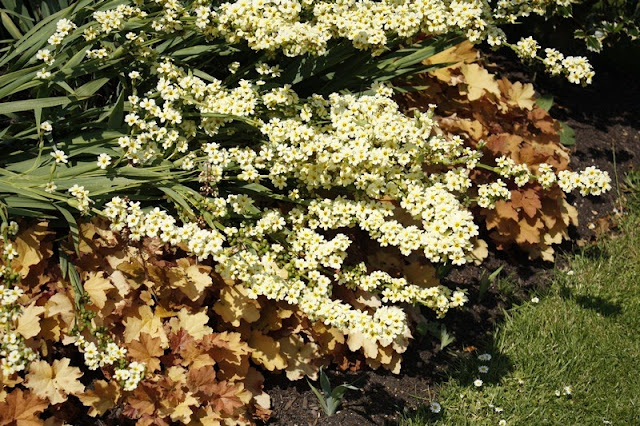 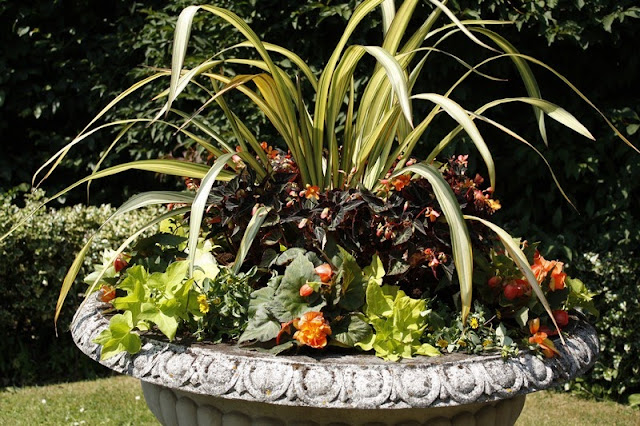 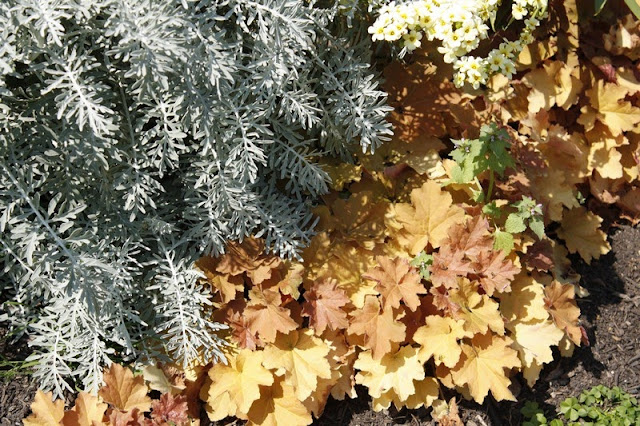 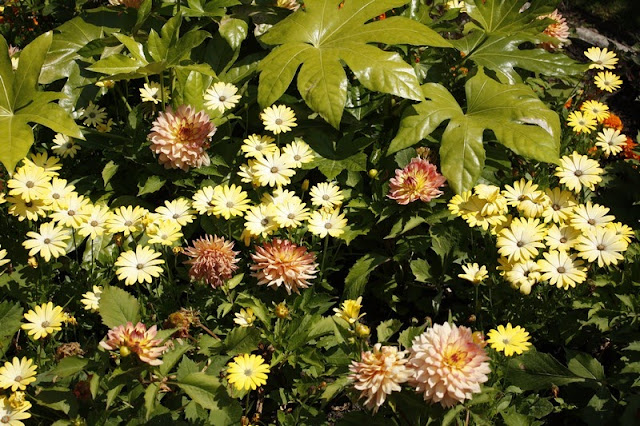 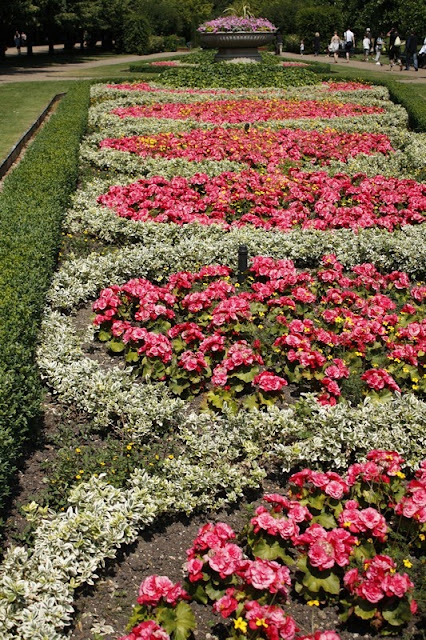 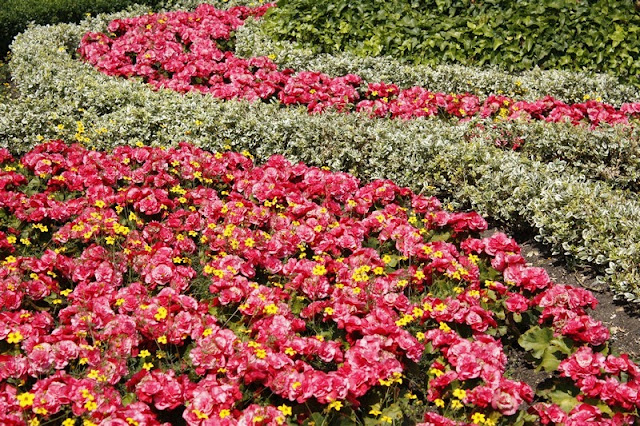 The day of my visit was hot and sunny and it was wonderful to see so many people enjoying the park; families, young people, joggers, office workers on lunch breaks, photographers and artists.  This was a wonderful day in a showy garden without a 'show garden' in sight!
Posted by Pampas2Palms at 12:11 AM 2 comments: