Visiting the Huntington Gardens the other day, my eye caught a bed of unusual roses. I have no idea what the names were but there were two colors and the effect was created by two different cultivars being grafted (or budded) onto the same bush. It was a bit of a novelty but we often plant complimentary plants together, so why not ensure they grow together. 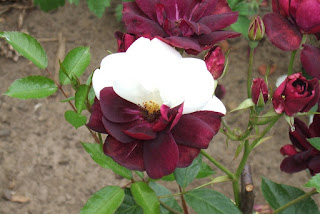 Grafting is of course an age-old process whereby one plant is united with the roots of another closely related plant, to generally give various benefits, such as vigor. However this example set me thinking about a few of the other novelty uses of grafting. In recent years gardeners may have noticed the resurgence of interest in grafted tomato plants - claiming to give extra vigor and disease resistance. But did you know that because they are related, a tomato can be grafted onto a potato plant, giving a 'tomtato' with a double crop? 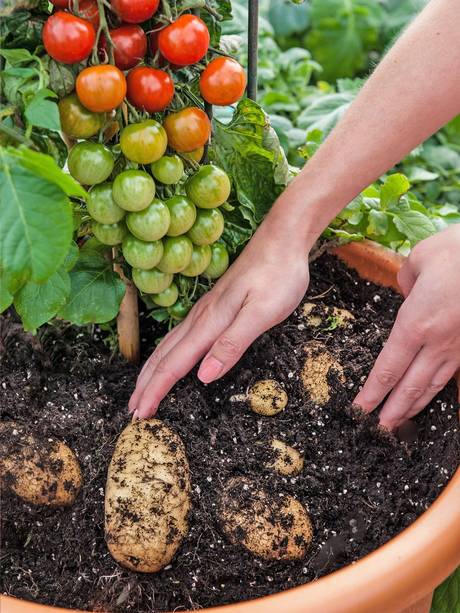 Another novel use of grafting if to create unsusual coloring and forms of cacti. I don't entirely understand the process and certainly don't appreciate the effects but there is a curiosity factor! 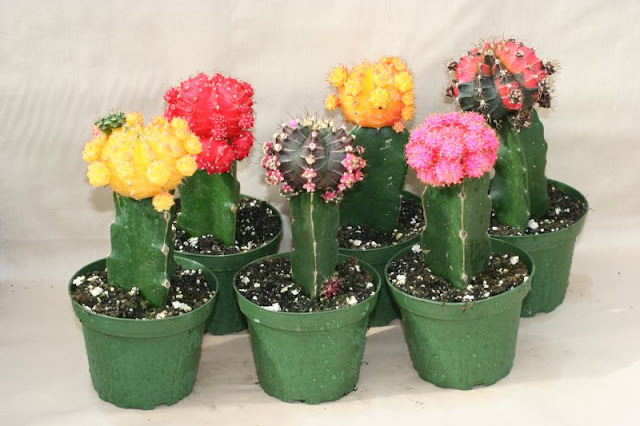 The next example I am not too sure of. The chrysanthemums in the picture below were part of a fantastic exhibition of the Japanese art of training chrysanthemums, Kiku. (Check out my previous blog on this) I think this plant was probably created by grafting a new variety for each different colored tier. However it was grown, it is nevertheless an amazing specimen. 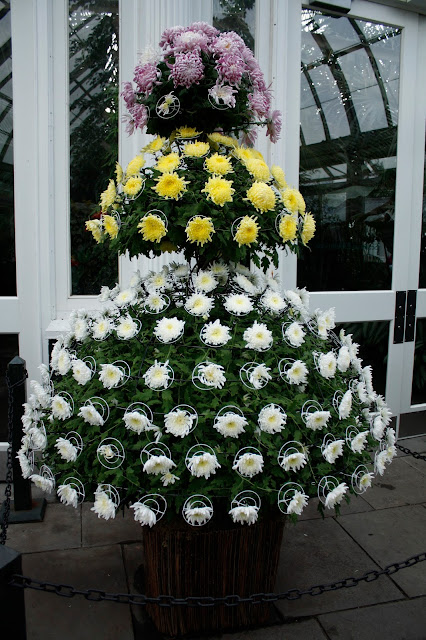 Family fruit trees have been around for ages. These are small trees that are grafted usually with three different cultivars of apple or pear which will in theory give a selection of fruit on maturity.  My good friend Tony back in Nottingham has taken this  to a new level by top-working an old apple tree with numerous different cultivars of apple. I forget how many but he has a whole orchard in one old tree.


One of my favorite curiosity plants is +Laburnocytisus adamii which is a graft hybrid. Many years ago a French nurseryman grafted together a Laburnum with a broom, Cytisus purpurea, two loosely related plants. The result was a plant in which the tissues mingled completely and this is known as a graft hybrid, designated with the little + symbol before the name. When in flower, it produces yellow laburnum flowers, purple broom flowers and some murky pinkish blooms half-way in between. 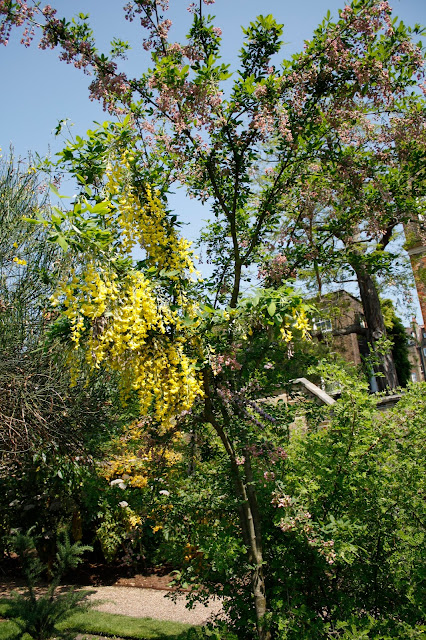 Back in the 80's I was responsible for the campus grounds at Reading University. As part of a restoration project we discovered an old manna ash, Fraxinus ornus, in a woodland called The Wilderness. It had been part of a garden that once existed and the tree was described in great detail in an old Gardener's Chronicle article, somewhere around the 1900's. The text described the tree's graft line and its contrast between smooth and rough bark, above and below the graft line, so we knew that it was the one. We treasured the tree but one day I noticed it looked frail and gave instructions for the branches to be supported. Sadly I was too late as that night the tree collapsed. A sad ending for an old warrior! 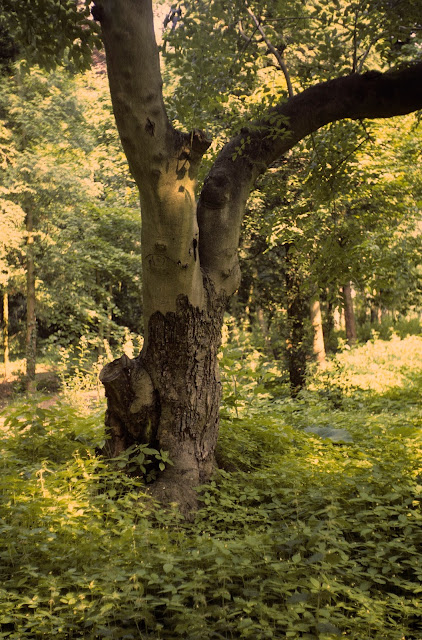 Gardens in winter - conjures up all sorts of images, generally of a rather sad, brown, dripping landscape. Originally the term winter garden was used for large glass conservatories, which were heated to create a garden-like atmosphere in winter. Many were of course attached to big private residences. The first public one was built in Regents Park, London in 1842 and probably one of the most famous was Paxton's Crystal Palace, built in 1851. 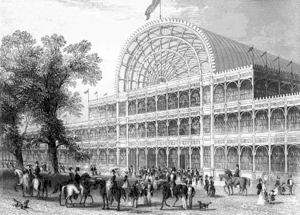 More recently the term winter garden refers to a carefully chosen blend of very tough evergreen shrubs, winter flowering plants and colored stems such as the winter garden at Cambridge Botanics in the UK. However today I am going to chat about my own little winter garden here in drought-ridden California. 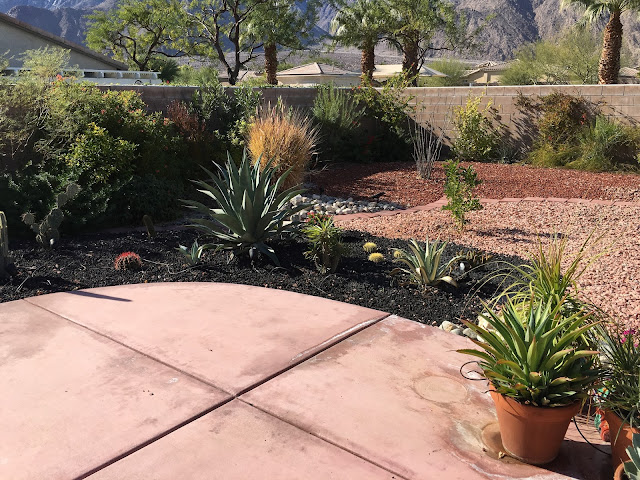 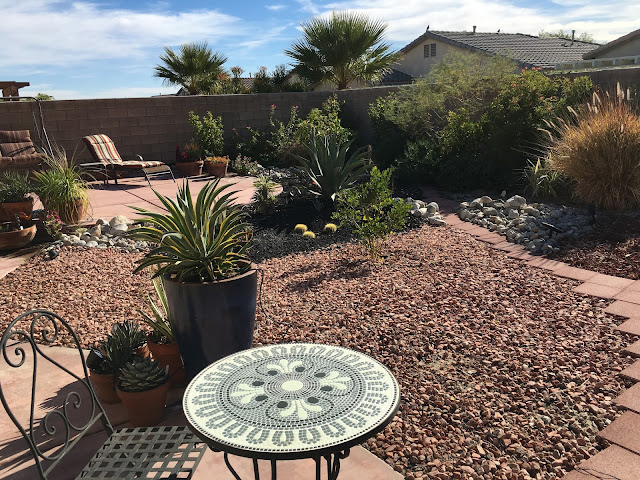 It's looking a little windswept and not as colorful as in summer but it's still a great outdoor space with lots of interest even in December. Just today I have replanted a low bowl with all my small special cacti, moved an agave into a pot on its own and planted a Euphorbia millii. Euphorbias are a wonderful group of plants and I'm amazed how many of them manage to produce red colorings  like this Euphorbia trigona 'Royal Red'. 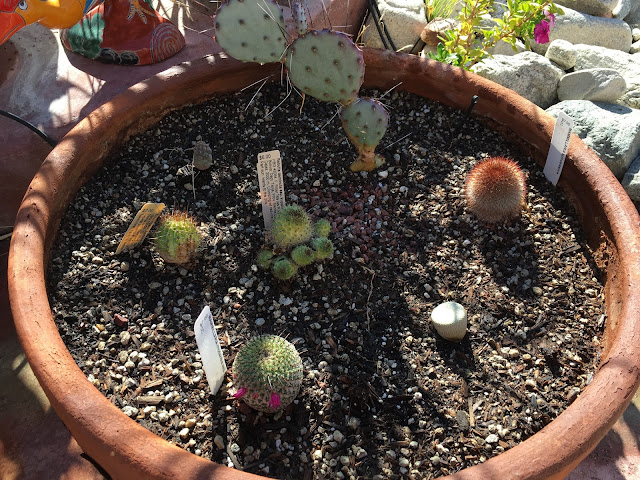 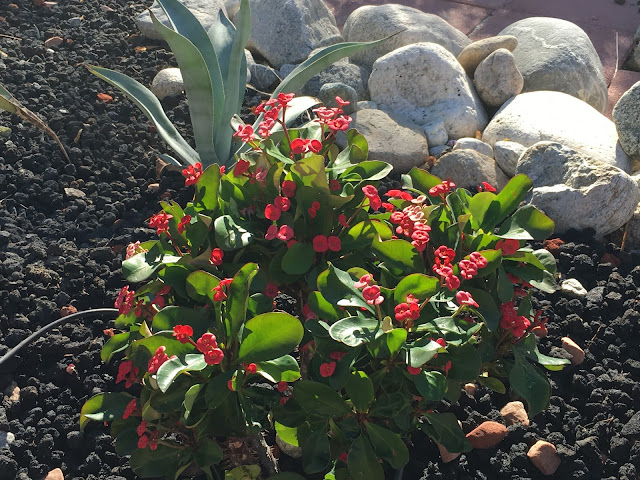 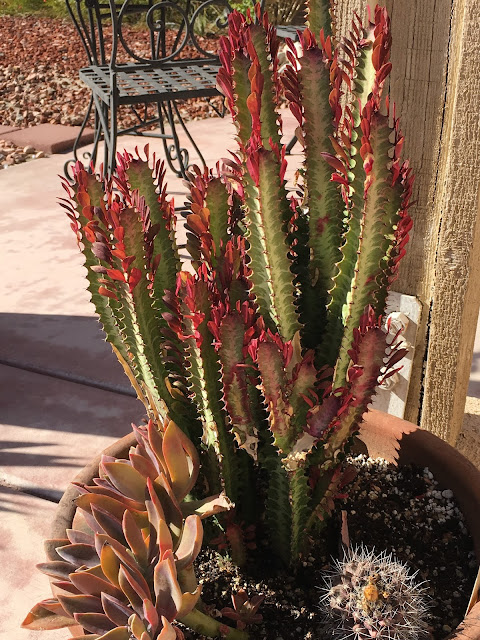 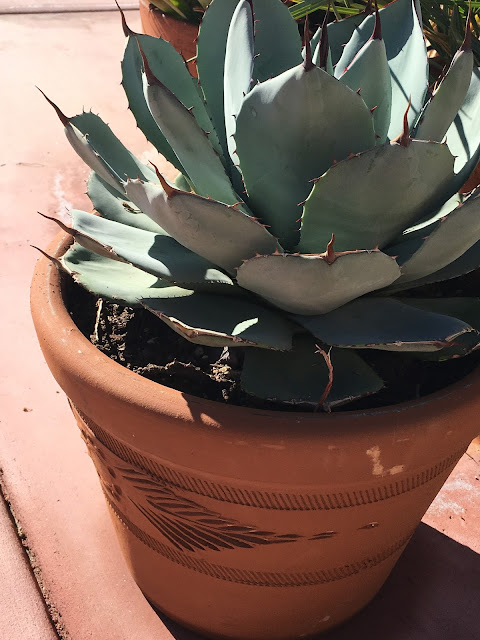 I usually plant a few new annuals in pots for a bit of winter color but to my astonishment both the celosia and zinnia I planted earlier in the summer self-seeded before they shriveled up in the August heat and I now have a new crop. 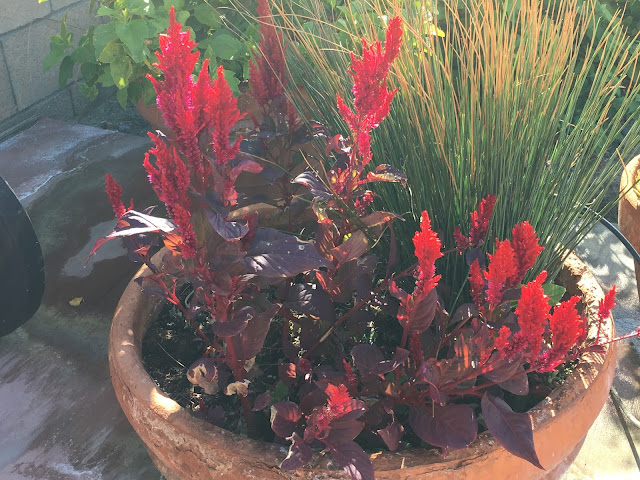 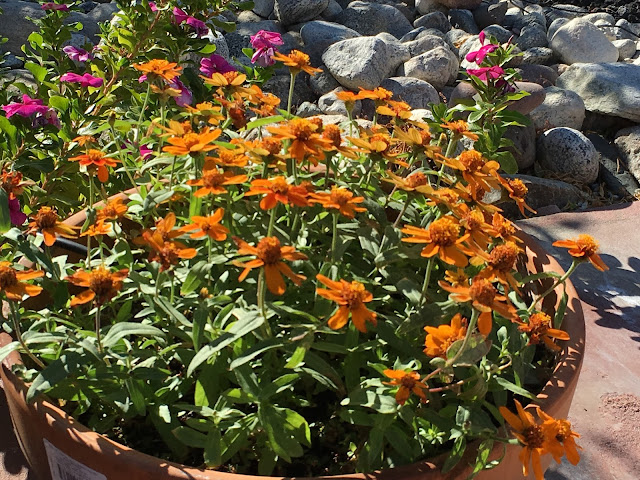 The Canna 'Durban', which I was thrilled to find earlier in the year has continued to provide us with lush foliage. I think we are now on the third flush of growth and having cut out some dull tatty leaves and a couple of old stems this morning, it still looks quite presentable. 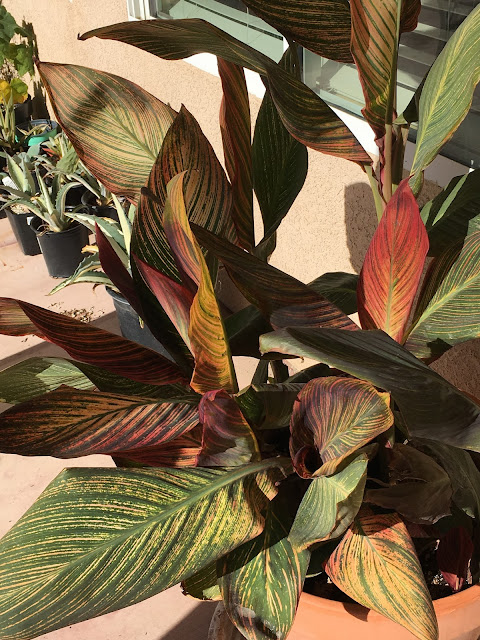 I love the tropical looking Hibiscus and whilst they are usually great the first year after purchase, they seem to struggle once planted  and are sparse in flowering. Mine have currently got an attack of a rather obnoxious mealy grey aphid which seems resistant to the common pesticides. The local ants seem to like them though and are busy - maybe it's the honeydew the aphis secrete. 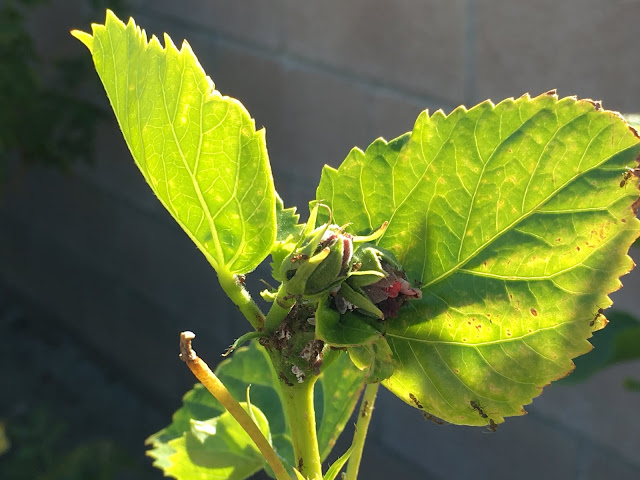 Finally I thought I'd show you my nursery corner where I cosset any new or young plants. Agaves are very generous providing 'pups' which I grow on and there's also a few new plants and my plumerias, sheltering for the winter. All told a very small and simple garden, but one that gives us much pleasure. 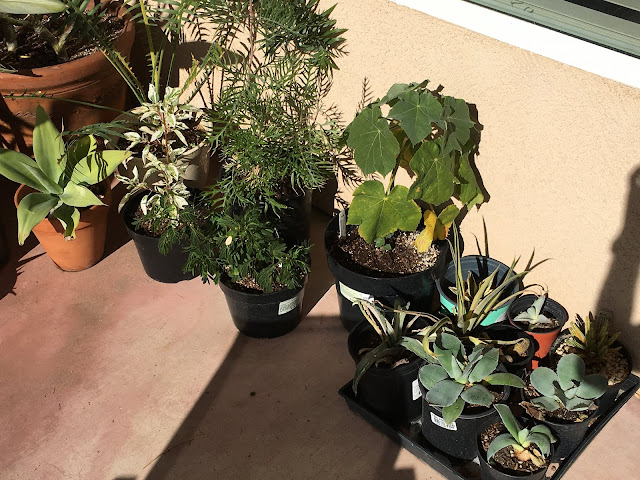 Posted by Pampas2Palms at 11:52 AM No comments:

Fall color at the Huntington

Having become a member of the Huntington and having a willing driver in my friend Jim, it is great to be able to visit regularly and see this beautiful garden at various seasons. This last trip was an attempt to see some fall color but apart from some beautiful ginkgos in the Japanese garden, there was little. Foliage of plants such as maples seemed to have just dried up without coloring. Despite this there was much to see in the garden and in particular some colorful aloes starting to flower in the desert garden. For those that want to know and see more of this garden, check out my earlier blogs in March 2012 and May 2015. As I've described the gardens in those earlier pieces, I'll just let the pictures speak for themselves this time. Increasingly I find myself captivated by the desert garden and all the curious and wonderful plants that thrive there. 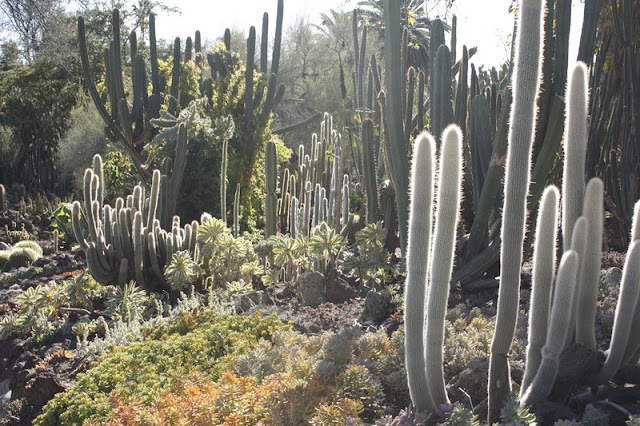 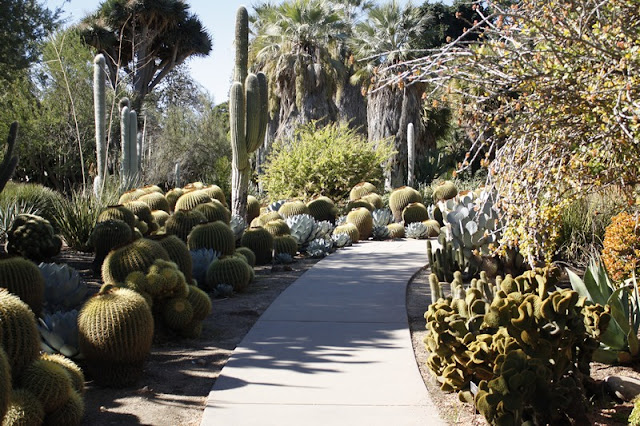 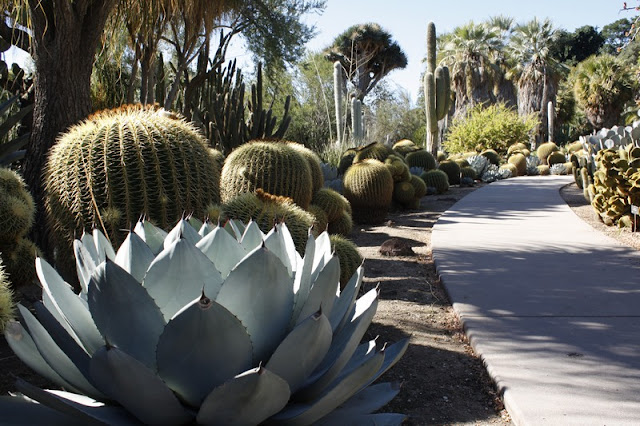 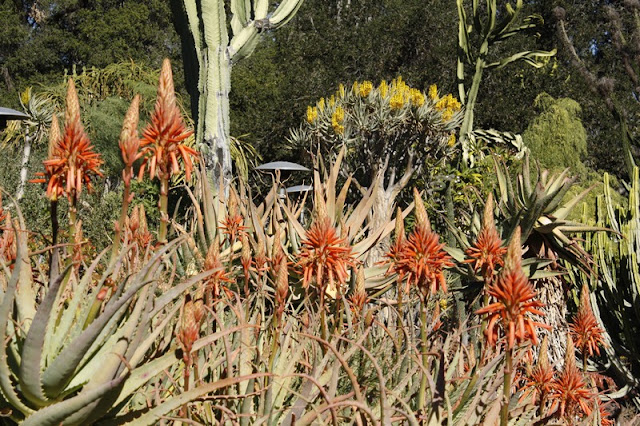 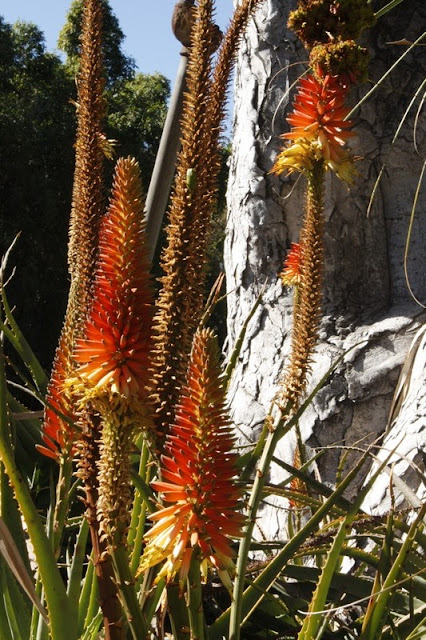 After the desert garden (and a very nice lunch)  we headed off through the jungle and subtropical gardens and then briefly visited the Japanese and Chinese gardens. 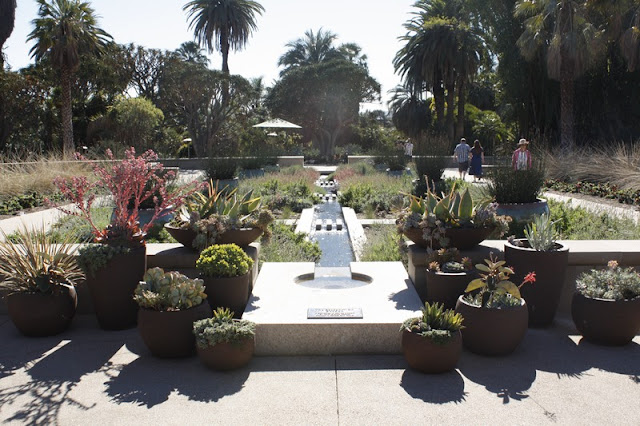 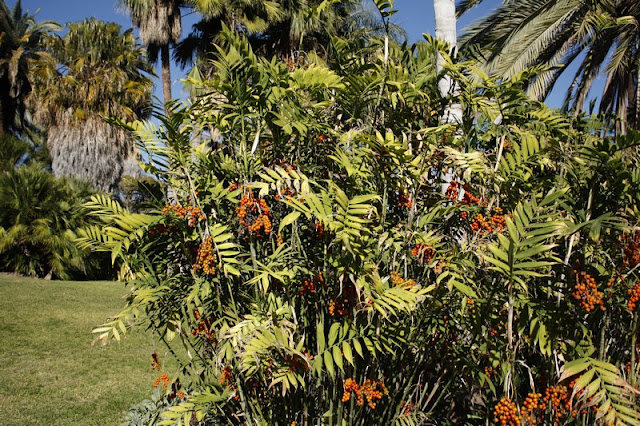 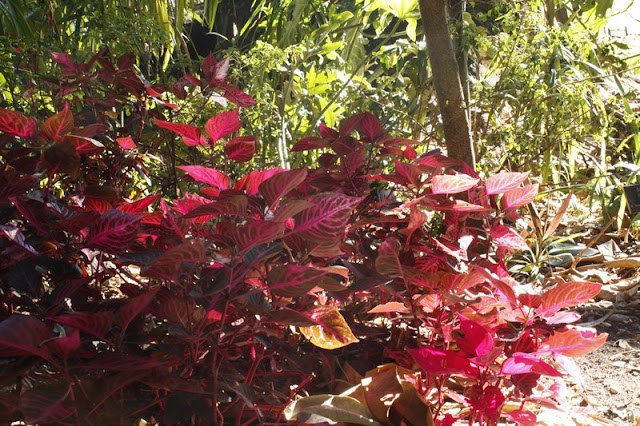 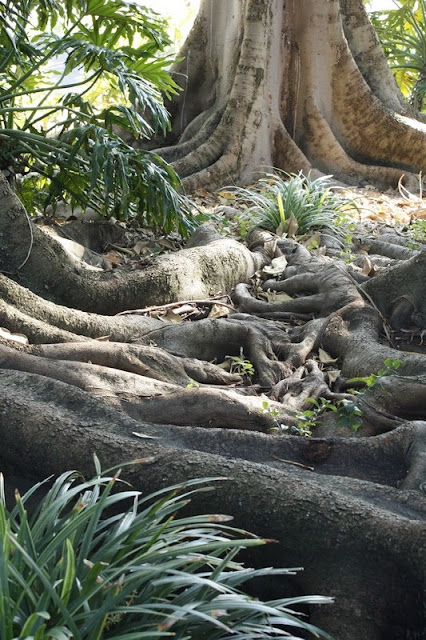 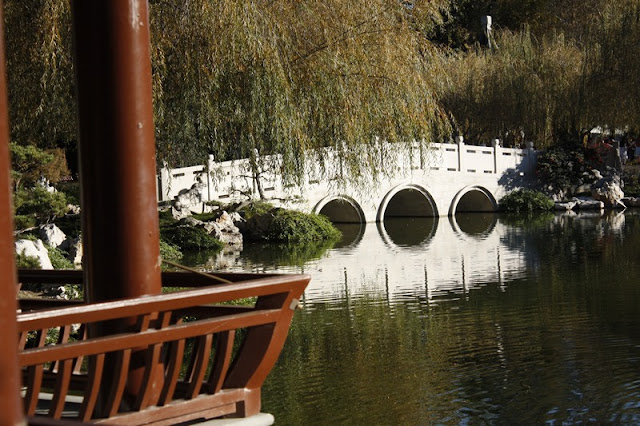 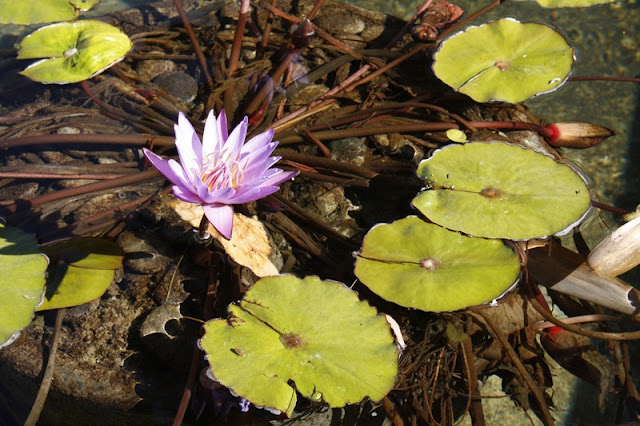